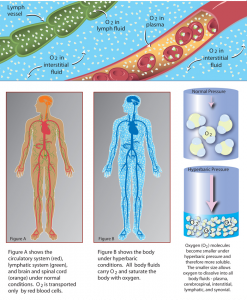 All of the fluids in the body -including blood, plasma, synovial, lymph and spinal fluids, become saturated with oxygen, which allows for all of the body’s vital cell processes to be performed at an optimal level. Swelling and inflammation of cells are reduced, while circulation and blood flow are increased, or restored to previously restricted areas. As a result, wounds and injuries heal more rapidly, recovery from surgery is much faster, and detoxification is also promoted; thus reducing the risk of any post-procedure complications or infections.

80% of energy used in cellular metabolism comes from oxygen. When cells and tissues are deprived of blood and oxygen, the metabolism comes to a halt and cells stop functioning properly. This lack of oxygen, or hypoxia, is a major component of disease and aging. The benefits of HBOT go far beyond restoring oxygen to depleted tissues and cells though. HBOT is the only non-hormonal DNA signaling drug that has been shown to regulate antioxidant, anti-inflammatory, growth, and repair gene expression. HBOT has also been shown to: